X-Mirage is the most professional AirPlay server for Mac and Windows PC, which allows you to wirelessly stream contents or mirror iPhone, iPad and iPod screen to any Mac/Windows PC. Record screen and audio from iOS devices, as well as voiceover via Microphone with one click. 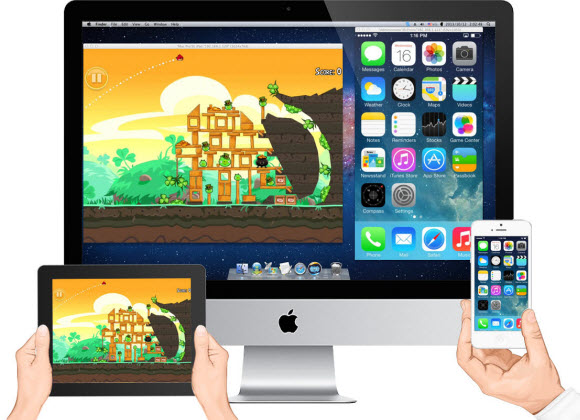 Mirror
Mirror the screen of your iPhone, iPad or iPod touch to your Mac or PC, wirelessly. AirPlay Mirroring makes it simple to project the screen of iOS devices to your computer.

Multiple devices
Mirror multiple iOS devices to one Mac or PC. You can name your computer to distinguish it from other AirPlay receivers. Invite your friends to mirror your favorite games to the same computer and compete with each other. Sharing has never been so easy.

One-click recording
Make demo videos, app design or showcasing, record lessons for students, record iOS games, iOS app tutorials. Whatever you do on your iOS devices can be recorded, then exported.

Mirroring. What you see on Mac/PC is what you show on iPhone, iPad or iPod.
X-Mirage turns your Mac and Windows PC into an AirPlay receiver for mirroring whatever on your iPhone, iPad or iPod screen – apps, games, photos, videos, presentations, websites and more to the bigger screen. X-Mirage receives AirPlay contents in full HD 1080p high-definition. Teachers can then mirror class material to computer, then to the projector, smartboard or HDTV while their fingers are moving on the iPad. Employees, businessmen just need to prepare presentations on any iPhone or iPad for mirroring to the Mac/PC when needed. For iOS app developers or designers, show your iOS app to the bigger computer screen for presentation to attract more people’s attention.

Streaming. Enjoy photos, movies and more on the bigger screen.
Vacation photos, treasured videos, beautiful music, AirPlay-enabled app, with X-Mirage, you can stream all these to your bigger Mac or Windows PC screen and you just need to sit back on the couch and enjoy the best visual and auditory effect from iOS devices on your Mac or PC. The media control bar allows you to play/pause, adjust volume, fast forward, fast backward, play next or previous directly on the Mac without picking the devices.

Games. The ultimate big screen gaming experience
If you are a game enthusiast, you may want to share your great scores with others. Still capture screenshots? Now, with the professional AirPlay receiver for Mac and PC – X-Mirage, you can record how you play the game and upload to YouTube by mirroring iOS games to Mac/PC. X-Mirage records your iPhone, iPad, iPod screen silently on Mac/PC while you are playing any games. Play any iOS game against your friends or families through mirroring multiple iOS devices to one Mac/PC or mirror dual-screen games to computer and make your iOS device as the ultimate controller.