Wondershare TunesGo for Mac is the best iTunes Companion: Transfer Music between iDevices, iTunes and Mac. Full freedom to transfer music and playlists from iPhone, iPad and iPod to iTunes Library on Mac. 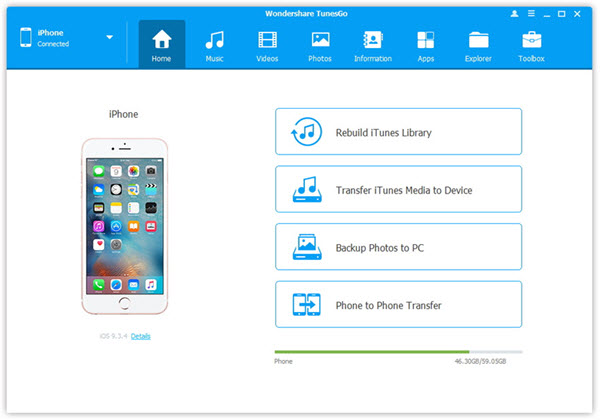 Why Choose TunesGo (Mac)
You can’t depend on iTunes to rebuild your iTunes Library or backup music, videos, photos, voice memos, etc. to your Mac. It simply can’t do it. Instead, you need a transfer software tool like Wondershare TunesGo (Mac). It’s a professional iPhone/iPod/iPad manager for Mac. It not only does what iTunes can do: transfer music, videos and photos to iPhone/iPod/iPad, but also does what iTunes can’t do: let you copy iPhone/iPod/iPad music and playlists (smart playlists included) to your iTunes Library with ratings, play counts & skips or backup videos, photos, voice memos, Podcasts and more to your Mac. Now, you’ll no longer worry about issues when managing your songs, photos, and video.

Convert and Transfer Songs & Videos on Mac to Play on Your iPhone/iPod touch/iPad
Have some killer songs & video, but can’t transfer any of them to iPhone, iPod touch, or iPad for play? Keep your shirt on. Let TunesGo Retro (Mac) do it for you. Whenever you drag an incompatible file to iPhone, iPod touch, or iPad via TunesGo Retro (Mac), it will convert the file properly for you. And it never wipes out the original files on your device. What’s more, it transfers photos from Mac to iPhone/iPod touch/iPad as well.