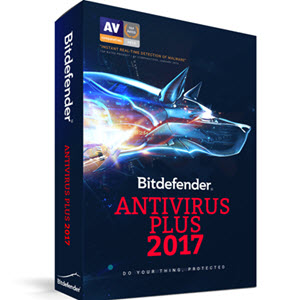 
Bitdefender Antivirus Plus 2017 protects against even the most dangerous e-threats without affecting your system’s speed. This means you get pure performance, with no slowdowns.

Category: Antivirus & Security. Tag: Bitdefender.
Note: please leave a comment to notify us if the price is wrong. Thank you!

Bitdefender Antivirus Plus 2017 is officially the best antivirus software today. It builds on technology awarded PRODUCT OF THE YEAR and uses machine-learning to fight off cyber-threats without impacting your device’s performance. Exceptional in its ease of use, it automatically takes the best security decisions for you, including data protection, securing payments and safeguarding your privacy.

Advanced security, light on resources
Bitdefender Antivirus Plus 2017 protects against even the most dangerous e-threats without affecting your system’s speed. This means you get pure performance, with no slowdowns. With Autopilot on, Bitdefender Antivirus Plus 2017 automatically makes the best security decisions to safeguard your data, your online transactions and your privacy.

Choose Bitdefender Antivirus Plus 2017 for the best value on the market. It’s packed with features and amazingly powerful, yet easy to use and feather-light on resources.

Protection
Bitdefender has had the best malware detection rate in the industry for the past 5 years. The secret of being the top cyber-security company for so long? We use advanced Artificial Intelligence and a host of other revolutionary technologies, as well as a global network of more than 500 million computers to anticipate, detect and instantly block even the newest threats, anywhere in the world. Even better, we do all of this without slowing down your devices.

Performance
A race car that is also an impenetrable armored vehicle? Well, Bitdefender Antivirus Plus 2017 may be just that. It’s incredibly powerful and ultra-fast at the same time — in more than one way. Our revolutionary technologies ensure instant reaction to malware, as well as pure performance from your system. It’s what lies under the hood that makes Bitdefender so fast and easy to use.

Privacy
We at Bitdefender know that you want to protect what is really important in your life. You want to choose what to share with the world and what to keep from prying eyes. That’s why Bitdefender Antivirus Plus 2017 incorporates tools and features that make it impossible for hackers, data snoops and all kinds of malicious programs to invade your private life.

Complete Data Protection
Absolute power in the most efficient antivirus available today. Bitdefender Antivirus Plus 2017 works against all threats, from viruses, worms and Trojans, to ransomware, zero-day exploits, rootkits and spyware. Your data and your privacy are in good hands.

Bitdefender Autopilot™
Once switched on, Autopilot will run your entire cyber-security by itself. It makes optimal security decisions without asking for your input through nagging pop-ups and dialog boxes. Nothing to set up, nothing to configure.

Worry-free and fast online
Bank and shop from a unique, dedicated browser that secures your transactions to prevent fraud. Bitdefender Safepay can now also automatically fill out credit card details in billing fields.

Active Threat Control
We use an innovative technique called behavioral detection to closely monitor your active apps. When Bitdefender Antivirus Plus 2017 detects anything suspicious, it takes instant action.

Bitdefender Photon™
This innovative, exclusive technology helps Bitdefender Antivirus Plus 2017 adapt to the hardware and software configuration of your system to save computing resources and improve speed and performance.

Social Network Protection
Stay safe from malicious links and any threats that your friends may unwittingly pass on to you via Facebook, Twitter, Pinterest or other social networks.