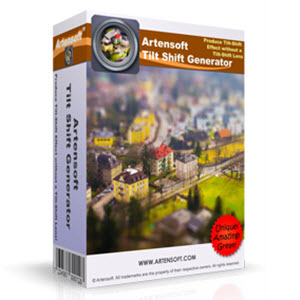 
Tilt-Shift Generator helps you reproduce the appearance of a miniature scale model in post processing without restricting yourself to a certain angle at the time of shooting – and without investing in expensive tilt-shift glass.

Category: Multimedia & Design. Tag: Artensoft.
Note: please leave a comment to notify us if the price is wrong. Thank you!

Re-create the tilt-shift effects by using your PC – no tilt-shift lens required! Make stunning dioramas by using computer-generated tilt-shift effect. Tilt-Shift Generator helps you reproduce the appearance of a miniature scale model in post processing without restricting yourself to a certain angle at the time of shooting – and without investing in expensive tilt-shift glass. 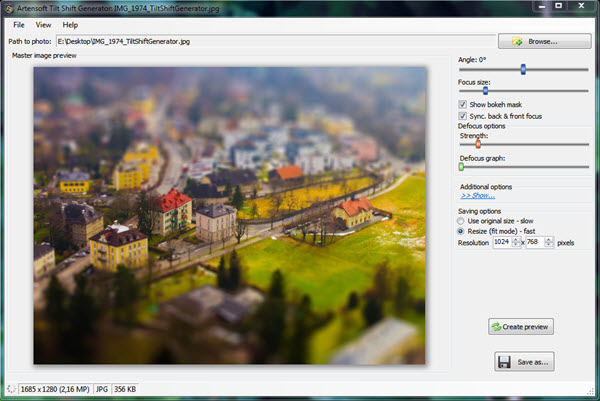 Tilting the lens simulates a macro shot or a miniature scene. This one effect is easy to reproduce in the post. You don’t lose anything by doing the tilt-shift effect in post-processing, and you won’t gain anything by using a real tilt-shift lens to capture the same scene. In fact, by using a real tilt-shift lens, you lose much of the convenience provided by modern autofocus cameras, sacrificing the AF and automatic aperture control. Check out today’s tilt-shift lenses: they cost an arm and a leg, yet they’re all manual focus, and some of them still require you to set aperture manually and use stop-down metering, slowing down your shooting a great deal.

What you shoot with a real tilt-shift lens is distorted forever. With Tilt-Shift Generator, you can produce multiple versions of the same images, choosing the greatest angle and keeping the undistorted original.

With Tilt-Shift Generator, you can turn any picture into a faux-miniature, creating an image that looks like it’s been shot in a macro or diorama setting without actually being one.

Selective Focus Made Easy
The tilt-shift technique employed by Tilt-Shift Generator can be used to re-create the selective focus effect produced by tilting a lens to a certain angle. With numerous settings and tweaks, you can use Tilt-Shift Generator to simulate miniatures you would not be able to shoot with a tilt-shift lens no matter how hard you tried.