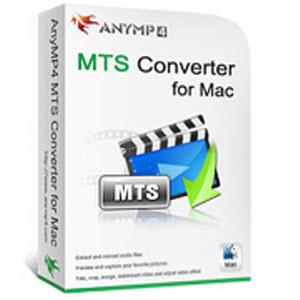 Categories: Mac OS, Multimedia & Design. Tag: AnyMP4.
Note: please leave a comment to notify us if the price is wrong. Thank you!

MTS video is known for its high definition and high quality, which determine its quite large size. The MTS file recorded by HD camcorders should be converted to any other popular video formats to reduce its size for playback on any mainstream portable player device. AnyMP4 MTS Converter for Mac can help Mac users convert MTS, M2TS, and TS video to any common video format such as MP4, MOV, M4V, AVI, WMV, FLV, MKV, 3GP, MPEG, and DivX, etc. Thus you can easily edit the MTS file in iMovie, iDVD and Final Cut Pro and then play back on iPad (iPad Air/4/Mini 2), iPhone (iPhone 6/6 Plus/5/5s/5c/4S), Samsung Galaxy S5, HTC, and PS3, etc.

Convert MTS video to play on Apple software
You can convert the MTS file recorded by HD camcorders to iPad, iPod, iPhone, and Apple TV compatible video formats to enjoy with your family and friendly.

Trim, crop, watermark, and merge
You can cut off a certain part of MTS video by defining the exact start and end time; define which part of the frame you need and get rid of video black edges; also input your favorite words, phrases or even your name to create a customized watermark, or add a picture watermark; even use the “Merge” function to join several videos/clips together, and output them as a single video file.

Preview and snapshot
AnyMP4 MTS Converter for Mac allows you to preview the customized video in order to avoid making mistakes. You can also take snapshot for your favorite scene and save it as a picture.

Convenient operations
AnyMP4 MTS Converter for Mac is built with a user-friendly inner core, and can help those who don’t have enough computer skills to use the software.