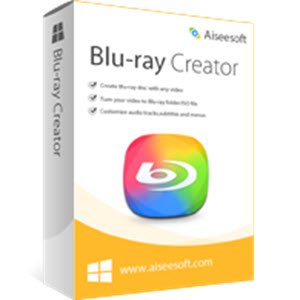 Categories: Special Offers, Multimedia & Design. Tag: Aiseesoft.
Note: please leave a comment to notify us if the price is wrong. Thank you!

Aiseesoft Blu-ray Creator allows you to create Blu-ray disc with video file or turn video into Blu-ray folder/ISO file. Make your own Blu-ray disc out from your own video, for long-term preservation and better sharing. 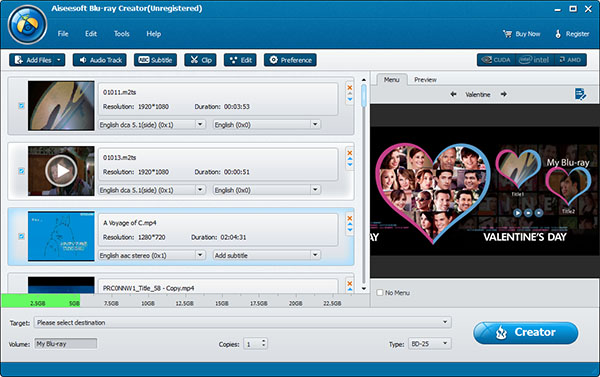 Create Blu-ray disc with any video
Aiseesoft Blu-ray Creator allows you to create Blu-ray disc out from any video you have, no matter it’s recorded by your camcorder, or downloaded from websites. All video formats, including HD videos, are supported, such as TS, M2TS, TP, TRP, MPG, MPEG, M4V, MP4, VOB, WMV, MXF etc. You are offered with two Blu-ray types, BD-25 and BD-50. After burning, the Blu-ray disc can be played on various popular Blu-ray players, such as PS3, Sony BDP-S5, Samsung BD-F, LG Electronics BP, etc.

Customize audio tracks, subtitles and menus
While creating a Blu-ray disc, you are provided with options of audio tracks and subtitles. Add your favorite audio file as the background music. Audio in any popular format is importable. Insert subtitle by adding file in SRT, SSA and ASS format. Meanwhile, we provide menus of different themes, along with editable buttons, texts etc. for your reference. In case any of them unsatisfying, edit it at your disposal.

Touch up the video as you wish
As to the editing feature, this Blu-ray Creator functions like a video converting tool before creating Blu-ray folder or file. The Clip function allows you to remove the unwanted parts or clip it to segments if the video is too long. If you make the video by yourself with unsatisfying effect, options under Effect are of great help. Problem of bothering letterbox can also be solved by the Crop function. What’s more, you get inspired by the watermark function if you are looking for a more personalized function.